Hugo Boogaerts is the founder of this steaming band that exists for over 25 years now en is responsible for the compositions that are, once again, based on a rhythm with on top an original, or even sometimes, funny ‘Monklike’ melodies. This will not surprise you if you know that he was a member of the innovating band ‘Wizards of Ooze’ with whom he toured through Europe a great deal. The compositions lean more and more to this great band in which his contribution had a large impact on the sound.

He played in different wellknown jazz-, pop- and soulbands as well in Belgium as in Holland. He ’s also demanded as a studiomusician and he composed music for commercials (Henzo, Telenet,...) and tv-tunes (Electionshow on the VRT “Quix”, the youthseries “W817”, ...)He played in several bands in tv-programs. In October 2000 he toured through Europa with Deep Purple as a saxofonist. Tour 2000 "Deep purple in Concert" ( with Philharmonic orchestra) 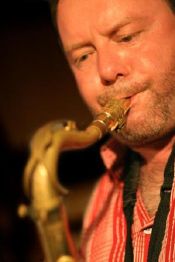